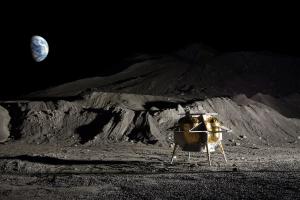 A model of a new Moon lander, Peregrine, is shown on a simulated lunar surface. It is one of two commercial landers NASA has selected to carry scientific instruments to the Moon in the next year or two. (A third company dropped out just two months after also being selected.) It is part of the agency's efforts to return astronauts to the Moon by 2024. NASA and European space agencies have recently announced several other new missions to explore the solar system, including two to the Sun, one to Mars, and one to a comet. [Astrobiotic]

The space lanes are going to get busier in the next few years. That’s because NASA and other space agencies have recently announced plans for several new missions to the worlds of the solar system.

In May, NASA selected three commercial landers to carry scientific instruments to the Moon. One will land in the Ocean of Storms, another in the Lake of Death, and the third in the Sea of Rains. All three will launch in the next two years.

NASA also approved new missions to study the Sun. One will focus on the Sun’s hot but faint outer atmosphere, the corona. And the other will study the effects of the solar wind on parts of Earth’s magnetic field. The missions will launch together, in two years.

The European Space Agency announced a new mission of its own: Comet Interceptor — even though no one yet knows where it’s going. It’ll consist of three craft that’ll be placed in a parking orbit. When a new comet enters the inner solar system, they’ll be sent to study it.

European agencies also announced a new rover, to crawl across one of the moons of Mars. It’ll hitch a ride on an already planned Japanese mission, which will bring samples of one of the moons back to Earth. Launch is scheduled for 2024.

Finally, NASA picked three candidates for another new mission. One would study water on the Moon, another would examine space weather around Mars, and the third would visit a double asteroid. The winner — or winners — will be selected next year.