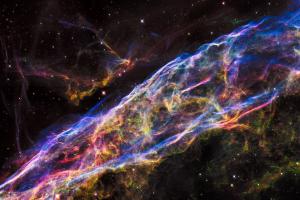 This Hubble Space Telescope image shows a portion of the Veil Nebula, formed by the expanding shock wave of an exploding star. The nebula is perhaps 2,500 light-years away, in Cygnus, the swan. It forms as the shock wave plows into cooler gas and dust expelled earlier in the star's life, causing the material to glow. The colors in this image are produced by the glow of different chemical elements. The massive star that created the supernova exploded about 8,000 years ago as seen from Earth, and would have shined brightly enough to see during the day. [NASA/ESA/Hubble Heritage Team]

Most of the glowing clouds of gas and dust that permeate the galaxy are associated with two phases of a star’s life: its birth and its death. A star is born from a giant cloud that splits apart to form many stars. And when a star dies, it creates its own beautiful cloud.

An example of the latter is the Veil Nebula. It’s in the constellation Cygnus, which is high in the east as darkness falls. The nebula is not far from the tip of one of the swan’s wings.

The Veil is the aftermath of a supernova — the explosion of a star at least 20 times as massive as the Sun. The blast took place about 8,000 years ago as seen from Earth. It would have been brighter than any other star or planet — bright enough to see during the daytime.

What we see today are filaments of gas from the explosion. They’re still expanding into space — at up to a million miles per hour.

There’s been some confusion about how far away the Veil is. A study last year put it at almost 2500 light-years — a good bit farther than other recent estimates.

The study also suggested that the visible filaments form when the expanding gas rams into surrounding clouds. In that way, the shockwave from the supernova is illuminating the clouds of gas around it — allowing us to see the contours of some otherwise dark neighbors.