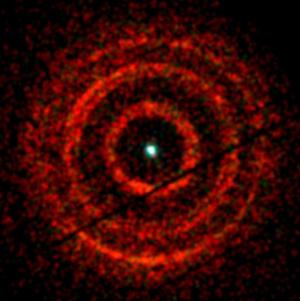 This X-ray image reveals "echoes" of light emitted by a disk of gas around V404 Cygni, a black hole in the constellation Cygnus. The echoes are formed as light hits material around the black hole, causing it to produce X-rays. The black hole is about nine times the mass of the Sun. It has a companion star that's less massive than the Sun. The black hole steals gas from the companion. The gas forms a disk. Every few decades, so much gas piles up that it causes an eruption, making the system flare brightly. The 's last eruption took place in 2015. [Andrew Beardmore (Univ. Leicester)/NASA/Swift]

A black hole in the constellation Cygnus keeps popping off. Over the last eight decades or so, it’s produced several big eruptions. And during the most recent one, astronomers saw that the black hole is “dragging” the space around it.

The system is known as V404 Cygni. It has two members. One is a black hole about nine times as massive as the Sun. The other is a “normal” star a little less massive than the Sun.

They’re so close together that the black hole “steals” gas from the companion. The gas forms a wide, swirling disk around the black hole. Every few decades, so much gas piles up in the disk that it causes an eruption. That makes the system flare thousands of times brighter than normal.

In 2015, V404 Cygni staged an outburst that was especially bright in X-rays. The outburst wasn't steady, though. Instead, it consisted of a series of flashes that lasted up to about an hour.

This year, researchers reported an interesting conclusion about those outbursts. They found that the disk isn’t quite aligned with the black hole. So material in the inner portion of the disk is warped. As the black hole spins, its powerful gravity drags the space around it. That causes the inner disk to wobble.

Magnetic fields squirt some of the hot gas in that part of the disk back into space as narrow “jets.” As the disk wobbles, the jets move like the streams of a spinning water sprinkler — shooting out material at more than half the speed of light.