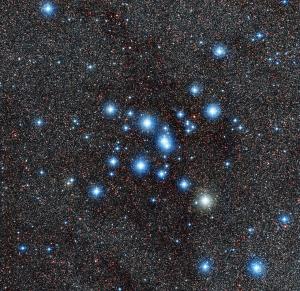 The brilliant stars of Messier 7 sparkle against the background of the Milky Way in this view from the European Southern Observatory. The stars all formed about 200 million years ago. Many of them are so big and bright, though, that they're already nearing the ends of their lives. Messier 7 sits above the tail of Scorpius, the scorpion, which wheels low across the southwest on late-summer evenings. [ESO]

Most of the constellations are tough to pick out. Their classical “connect-the-dots” outlines are so faint, small, or spread out that it’s tough to see them as pictures.

That’s not the case for two of the most prominent constellations of summer, though. Scorpius and Sagittarius are big and bright, and they’re easy to pick out. They’re in the south at nightfall on these late-summer evenings. Look for the curving body of the scorpion just above the horizon, with the orange star Antares in its middle. Sagittarius is to the left of the scorpion, with its brightest stars forming a teapot.

If you have a dark sky, away from city lights, look about halfway between them — between the scorpion’s stinger and the spout of the teapot — for a hazy patch of light that’s a bit bigger than the full Moon.

That’s Messier 7, a star cluster that’s close to a thousand light-years away. Its hundred or so stars were born from a single cloud of gas and dust, around 200 million years ago.

One reason the cluster stands out is that several of its stars are nearing the ends of their lives. That’s caused them to puff up to giant proportions. Such stars are hundreds of times brighter than the Sun, so they’re visible across great distances.

Binoculars will show quite a few of the cluster’s stars, while a small telescope will let you see most of them — a family of stars sitting between two prominent constellations of summer.