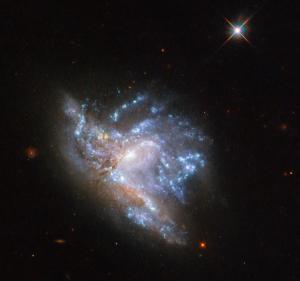 A pair of galaxies is staging a messy merger about 230 million light-years away, in the constellation Hercules. Known together as NGC 6052, both galaxies are spirals similar to our home galaxy, the Milky Way. As the galaxies come together, gravity pulls out streamers of stars that can stretch for tens of thousands of light-years. The merger also causes clouds of gas and dust to slam together, giving birth to millions of new stars. This view, from Hubble Space Telescope, also shows several more-distant galaxies around NGC 6052, which look like red swirls and slashes. The bright object at top right is a foreground star. [ESA-Hubble/NASA/A. Adamo et. al]

NGC 6052 is a mess. It looks a little like a pair of big spiders locked in mortal combat. Instead, though, it’s two galaxies that are staging their own combat — they’re in the process of merging.

The galaxies are about 230 million light-years away. They’re in the constellation Hercules, which is high in the western sky on August evenings. Both galaxies are spirals — cosmic pinwheels that are similar to our own galaxy, the Milky Way.

As the galaxies of NGC 6052 come together, gravity is throwing some of their stars out of the galaxies in giant ribbons. At the same time, clouds of gas and dust are slamming together to give birth to new stars. In fact, colliding galaxies create new stars at an amazing rate — hundreds of times more stars than the Milky Way is making.

Collisions between galaxies are common. So most of the galaxies in the present-day universe probably are the result of a series of mergers between smaller galaxies.

In fact, a study a couple of years ago found that we should be able to see up to two trillion galaxies. But many of those galaxies are puffballs that existed when the universe was young, and their light is just now reaching us. If we could take a snapshot of the universe right now, we’d see only a couple of hundred billion galaxies. Most of the early galaxies would have vanished — swallowed up in galactic mergers.

The Milky Way is headed toward its own big merger, and we’ll talk about that tomorrow.