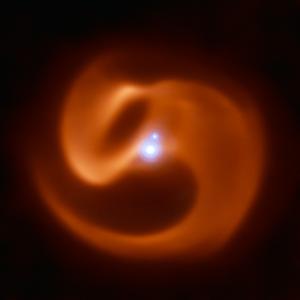 Swirls of gas surround a pair of stars that may someday explode as gamma-ray bursts. The swirls reminded astronomers of a coiled snake, so they nicknamed the system Apep after an ancient Egyptian god of chaos and darkness. The two closely bound stars are many times larger and more massive than the Sun. They're also tens of thousands of degrees hotter, so they blow strong "winds" of hot gas into space. As the stars orbit each other, the winds twist around like the streamers of a spinning water sprinkler. The cores of the hot stars eventually will collapse to form black holes. Swirling disks of gas around the black holes will eject streamers of extremely hot gas, forming "jets" from the stars' poles. Any star that aligns along one of those jets will see a gamma-ray burst, which can produce as much energy in minutes as the Sun will in its entire lifetime. This image, which was shot at infrared wavelengths, shows two bright stars at the center. The brighter spot is actually the combined light of the close twins, while the other is a third star that is much farther from the other two. [ESO/Callingham et. al]

Apep was one of the nastier gods of ancient Egypt. He was the god of chaos — a huge snake that lurked in the underworld, fighting the Sun god Re every night.

And he’s the namesake of a star system that could have a nasty future. One of its stars could produce a blowtorch that could destroy any life within hundreds or thousands of light-years.

Officially, the system is known by a catalog number. But in a picture obtained last year, it looks a bit like a coiled snake — a form that helped inspire the nickname.

Apep is about 8,000 light-years away. It consists of three stars. Two of them form a tight pair. The third is well away from them.

The members of the pair probably are Wolf-Rayet stars. These are massive stars that are near the ends of their lives. They’re extremely hot and bright. And they die in violent explosions.

Some of the explosions produce outbursts of gamma rays, the most powerful form of energy. In a few seconds, such an outburst releases more energy than the Sun will produce in its entire lifetime. The beam of gamma rays could incinerate anything close to the star, and severely damage planets at much greater range.

One of the Wolf-Rayet stars is spinning so fast that it’s almost whirling itself apart. It’s producing a “wind” of gas that’s blowing at more than seven million miles per hour. The rotating stream of gas collides with a slower stream from its companion. That produces the coiled-snake appearance — the spooky look of Apep.