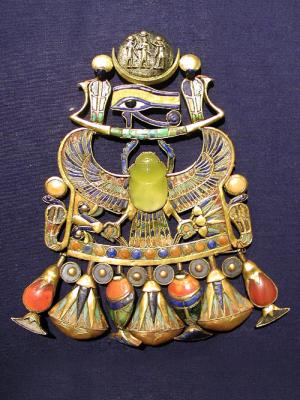 A golden scarab beetle made of glass highlights this pectoral worn by King Tutankhamen more than 3,000 years ago. The glass, known as Libyan Desert Glass, formed about 29 million years ago when a space rock plunged to Earth. A recent study says the rock slammed into the desert surface, melting the sand and splattering the glass across many square miles. [Jon Bodsworth/Wikipedia]

One of the treasures from the tomb of King Tutankhamen is an elaborate pectoral — a piece of jewelry worn on his chest that honored the Sun god. It’s made of gold inlaid with turquoise and other colorful stones. And its centerpiece is a scarab beetle made of golden glass — a symbol of the Sun god, and of the cycle of life.

The glass formed in the Sahara Desert about 29 million years ago. And a recent study says it was the result of an impact by a big space rock.

Scientists have debated the origin of Libyan Desert Glass for decades. Some studies have suggested it formed when a space rock exploded above the surface. The resulting heat melted the desert sand, creating slabs of glass that were blasted across many square miles.

But the new study, by researchers in Australia, says the meteoroid made it all the way to the ground.

The impact melted the sand, just as an airburst would have. An impact, though, created more powerful shock waves, which rippled through the melted glass. That converted grains of zircon to a mineral known as reidite. Over time, that mineral reverted to zircon. But it left a “fingerprint” in the zircon, which the researchers discovered.

At least a couple of big space rocks are known to have exploded in the atmosphere in the last century-plus, supporting the idea of an airburst over the Sahara. The new research, though, suggests that such outbursts might be less common — and less of a threat to life — and to desert sands.