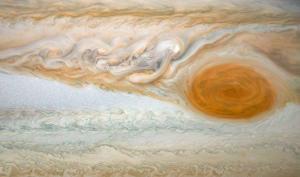 Jupiter's Great Red Spot, the largest storm in the solar system, is shrinking. At its peak it was more than twice as wide as Earth, but today it only equals Earth's diameter. In recent years, it's been spinning off scythe-shaped streamers of clouds. This image is a composite of several pictures snapped in May by Juno, which is orbiting Jupiter, with the color and contrast enhanced. The picture shows turbulent clouds bordering the spot. Planetary scientists do not yet have an explanation for why the spot is shrinking, and they don't know if it will rebound or simply vanish. [NASA/JPL/SwRI/MSSS/Kevin M. Gill]

There are two features in the solar system that just about anyone will recognize. One is the rings of Saturn. The other is the baleful “eye” of Jupiter: the Great Red Spot.

Recent work suggests that both are temporary. Saturn’s rings could disappear in as little as a hundred million years. And the Great Red Spot could be gone in decades.

Astronomers have kept an eye on the Great Red Spot — the solar system’s largest storm — for a couple of centuries. And they might have seen it as early as the 1600s. At its peak, it was more than twice as wide as Earth.

In the last few decades, though, it’s been shrinking. Today, it’s only about half its earlier diameter. And in the last couple of years, it’s started to show some odd behavior. Friction with a band of clouds below the spot has started pulling out blade-shaped streamers of clouds. The streamers wrap around the spot, and they can stretch for thousands of miles.

It’s possible that that’s just part of a normal cycle. But it’s also possible that the streamers could drain away this giant storm — marking the beginning of the end for one of the solar system’s best-known features.

And Jupiter is especially easy to find this evening. It looks like a brilliant star, quite close to the lower right of the Moon. As a bonus, the bright orange star Antares — the heart of the scorpion — is a little farther along the same line, completing a beautiful lineup in the evening sky.