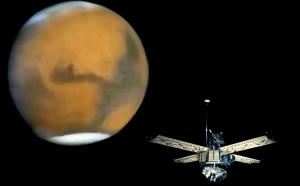 The Mariner 7 spacecraft takes aim at Mars in this composite image. The view of Mars itself was compiled from three black-and-white images snapped by Mariner 7, which flew closest to Mars on August 4, 1969. Mariner 7 arrived at Mars just five days after its twin, Mariner 6. Combined, they snapped almost 60 close-range pictures of Mars. They also measured the surface temperature and the density of the Martian atmosphere. The Mariners were only the second and third successful missions to the Red Planet. [NASA]

When scientists dispatched Mariner 6 and 7 toward Mars, they carefully planned what portions of the planet the twin craft would study. But no one had seen the planet in enough detail to aim them at its most interesting features. As a result, the probes photographed lots of craters and plains. But they missed the planet’s giant volcanoes and canyons — features that really set Mars apart.

The second of those craft, Mariner 7, flew past Mars 50 years ago today — just five days after Mariner 6. Both of them skimmed about 2100 miles above the surface. One flew over the equator, while the other took aim at the region around the south pole.

In all, the craft snapped almost 60 close-range pictures of the Red Planet. The images revealed craters of various sizes and ages. They also showed some dusty plains.

It wasn’t until the next Mariner, which entered orbit around Mars a couple of years later, that we began to see what an interesting world Mars really is. In particular, that’s when we saw that water had flowed across the planet in the distant past.

The water is long since gone. But Mariner 6 and 7 found one hint about its fate. They measured hydrogen atoms escaping from the top of the atmosphere. Hydrogen is one of the two elements that make up water molecules. That suggests that the molecules were split apart, and the lightweight hydrogen drifted off into space — leaving Mars dryer and a lot less interesting.