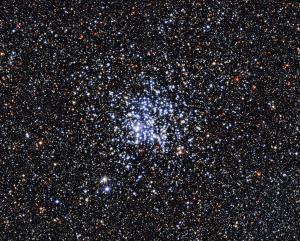 Messier 11 is one of the biggest star clusters of its type in our region of the galaxy. It contains about 3,000 stars and spans a few dozen light-years. Its hotter, brighter stars shine blue-white in this image from the European Southern Observatory. M11 is in the constellation Scutum, and is about 6,000 light-years away. [ESO]

You can’t always tell the relative ages of siblings just by looking at them. Differences in genetics — and in lifestyle — can make a younger one look older, or an older one look younger.

The same thing is true of the star cluster Messier 11. Its stars should all be about the same age. But they don’t look it. That may be the result of some fast living.

Messier 11 is one of the biggest and heaviest clusters of its type. It contains about 3,000 stars, all packed into an area that’s a few dozen light-years across.

Some recent research says the difference is fast living. The stars all rotate at different speeds. Stars that spin faster mix up the gases in their cores, extending their lifetimes. They also look redder, which makes them look older. So while the stars are about the same age, they just don’t look it.

Messier 11 is in the southeast at nightfall. It’s in the constellation Scutum, to the upper left of teapot-shaped Sagittarius. Under dark skies, M11 is just visible to the unaided eye, even though it’s about 6,000 light-years away.

Seen through binoculars or a telescope, its brighter stars form a “V” that resembles a flock of ducks. That earned the cluster a nickname: the Wild Duck.