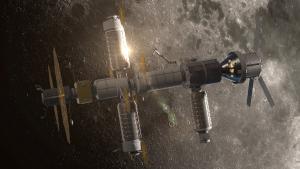 A half-century after the first astronauts walked on the Moon, NASA is working on plans for the next round of lunar exploration. A key part of its plans is Gateway, a small space station that would follow an elongated orbit around the Moon. The Space Agency says astronauts would observe the Moon, remotely operate robotic missions, and perhaps stage their own landings from the outpost. This artist's concept shows one possible configuration for the craft. [Northrop Grumman]

Shortly after Apollo 11 splashed down in the Pacific Ocean 50 years ago today, a NASA spokesman was describing the busy scene in Mission Control:

PAO: Across the big board in front is President John F. Kennedy’s message to Congress of May 1961: I believe that this nation should commit itself to achieving the goal, before this decade is out, of landing a man on the Moon and returning him safely to the Earth. That has been accomplished.

Mission accomplished — but not complete. Five more sets of astronauts landed on the Moon. They set up instruments to study the Moon, and brought back about 800 additional pounds of samples that scientists are still examining.

A long lunar hiatus followed the last Apollo. But interest in the Moon is increasing. Several nations have sent robotic probes to the Moon in recent years.

NASA is ramping up its plans for the Moon as well. It’s developing a mothership to carry astronauts to the Moon and Mars, for example. It’s also planning a small space station known as “Gateway.” The station would follow a stretched-out orbit around the Moon. Astronauts would live there for weeks at a time, perhaps dispatching and operating lunar robots. And astronauts might land on the Moon themselves — perhaps as early as 2024.

There’s no guarantee that any of these plans will come to pass. Yet it seems certain that the Moon will receive more attention in the years ahead — building on the legacy of Apollo.