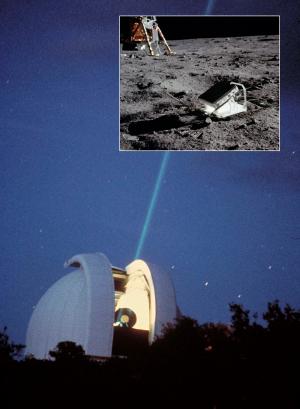 A laser beam fires from the 107-inch telescope at McDonald Observatory. Its first target was a special reflector left on the Moon by Apollo 11 astronauts Neil Armstrong and Buzz Aldrin in July 1969 (inset, near the lunar module, Eagle). The laser project was moved to a smaller telescope at McDonald in the 1980s, where it continued to ping the Moon until about a decade ago. The reflected laser beam provided a highly accurate measurement of the Earth-Moon distance. Scientists have used that information (along with measurements that continue to be made at other observatories) to probe the Moon's interior and study Albert Einstein's theory of gravity, among other applications. [McDonald Observatory; inset: NASA]

Apollo 11 was coasting toward the Moon 50 years ago this month when Mission Control passed along a request.

CAPCOM: Roger, Apollo 11. We got a laser. It’s a blue-green laser that we’re going to flash on and off. It’s coming out of McDonald Observatory. Would you please take a look through the telescope and see if you can see it? Over. ... APOLLO 11: Okay, Houston, neither Neil nor Mike could see it.

Although the astronauts didn’t see the laser, a special reflector they set up on the Moon did. The McDonald Observatory laser first found it a few weeks after the astronauts left the Moon. And the observatory continued to ping the reflector for more than four decades.

Today, other observatories are carrying on with that work. They’re using five reflectors, left by American and Soviet missions. Scientists time how long it takes a laser beam to hit a reflector and bounce back to Earth. That reveals the Earth-Moon distance to within about a millimeter.

From those observations, scientists have found that the Moon is moving away from Earth at about an inch and a half per year. By measuring “wobbles” in the Moon’s motion, they’ve discovered that the Moon has a molten outer core. And by measuring how Earth and the Moon “fall” toward the Sun, they’ve confirmed Albert Einstein’s theory of gravity to a high degree of precision.