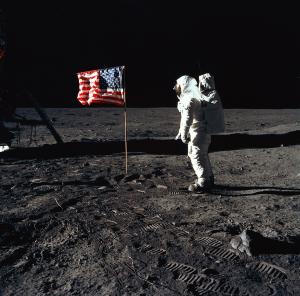 Apollo 11 Lunar Module Pilot Edwin 'Buzz' Aldrin salutes the American flag during his two-hour moonwalk. Aldrin and mission commander Neil Armstrong landed on the Moon on July 20, 1969, and conducted their EVA that night. The astronauts gathered about 50 pounds of rock and dirt for return to Earth. [Neil Armstrong/NASA]

On the night of July 20th, 1969, Neil Armstrong was ready to make history:

The commander of Apollo 11 became the first person to set foot on another world: the Moon. Crewmate Buzz Aldrin joined him on the Sea of Tranquility a few minutes later.

During their two-hour moonwalk, they gathered about 50 pounds of rock and dirt. They set up a seismometer that recorded “moonquakes” for days after their departure. And they set up a laser reflector that’s still being used; more about that tomorrow.

While 600 million people watched on TV, the astronauts took a phone call from President Richard Nixon:

NIXON: For one priceless moment, in the whole history of man, all the people on this earth are truly one, one in their pride in what you have done. And one in our prayers, that you will return safely to Earth.

And Armstrong read a plaque attached to their lander, Eagle, which stayed on the Moon when they left:

ARMSTRONG: First there’s two hemispheres, one showing each of the two hemispheres of the Earth. Underneath it says, “Here Men from the planet Earth first set foot upon the Moon, July 1969 A.D. We came in peace for all mankind.”

Armstrong and Aldrin left the Moon on the morning of the 21st — starting the long journey home.