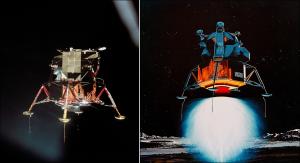 Heading for a Touchdown

Eagle, the Apollo 11 Lunar Module, heads toward the Moon on July 20, 1969. Astronaut Michael Collins snapped the image at left shortly after Eagle separated from the mothership in lunar orbit. At right, a painting depicts the craft landing on the Moon. Neil Armstrong and Edwin 'Buzz' Aldrin faced several problems during the descent, including computer errors, communications glitches, and a radar system that was taking them beyond their planned landing site. [NASA; NASA/TRW]

One of the things that amazes many about the Apollo Moon landings is how primitive their computers seem. A smartphone is millions of times more powerful than the computer on Eagle, the lunar module that carried Neil Armstrong and Buzz Aldrin to the Moon 50 years ago tomorrow.

But that’s a bit deceptive. Armstrong and Aldrin didn’t use the computer to play video games, book dinner reservations, or post on Instagram. Instead, they used it for a single job: landing them safely on the surface of the Moon.

The Apollo computers were developed by MIT — a process that took eight years. The computers stored information in tiny metal “doughnuts” interlaced by wires.

As Eagle descended toward the Moon, though, its computer began fussing at the astronauts. Through a series of unforseen circumstances, it was getting overloaded. So it set off alarms.

But the computer was designed to not freeze or crash when things went wrong. Instead, it dropped the least-important programs and kept running the crucial ones. In that way, the computer successfully guided astronauts to the Moon — a task no smartphone has ever done.