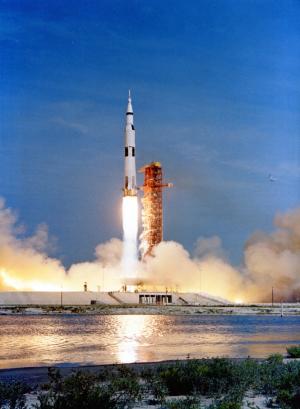 PAO: The target for the Apollo 11 astronauts, the Moon, at liftoff will be at a distance of 218,096 miles away. LAUNCH CONTROL: Apollo 11, this is the Launch Operations Manager. The launch team wishes you good luck and godspeed.

Astronauts Neil Armstrong, Edwin Aldrin, and Michael Collins were ready for a summer getaway. Instead of heading for Florida, like many other Americans, they were heading away from it. Their destination? The Moon.

Armstrong and Aldrin were scheduled to become the first astronauts to set foot on our satellite world.

A million people were watching the launch from the Florida beaches. And hundreds of millions were watching on live television around the world.

PAO: Four, three, two, one, zero! All engine running. Liftoff! We have a liftoff, 32 minutes past the hour. Liftoff on Apollo 11!

The flight was the culmination of a long race against the Soviet Union. It required billions of dollars, and the efforts of many thousands of engineers, scientists, and others.

NASA had launched a couple of dozen robotic missions to the Moon to develop the technology, to pick landing sites, and to make sure the surface would support a lander. And two Apollo missions had checked out the lander and mothership in lunar orbit — setting the stage for the getaway of a lifetime.

A FAREWELL MESSAGE FROM SANDY WOOD

Since 1991 I’ve been with you every day, telling you about the wonders of the universe. Recent health problems, though, have left me unable to continue, so this is my final episode. My thanks for all of the support from our Star Date audience — the best in the universe! So, for the final time, let me say — for the McDonald Observatory, I'm Sandy Wood.