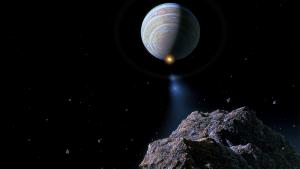 The fragments of Comet Shoemaker-Levy 9 take aim at Jupiter in this artist's concept. The first of 21 fragments hit the planet on July 16, 1994 (one of the impacts is depicted in this illustration). Each impact produced a powerful fireball and left a dark scar in Jupiter's atmosphere. The scars lasted for months. The impacts spurred Congress to require NASA to start looking for comets and asteroids that could potentially hit Earth. [NASA/GSFC]

The biggest fireworks we’ve ever seen in the solar system rocked the planet Jupiter 25 years ago this month. The fragments of a shattered comet slammed into the planet. The impacts created scars that lasted for months. And they created new urgency in the effort to find comets or asteroids that might hit Earth.

Comet Shoemaker-Levy 9 was orbiting Jupiter when the planet’s gravity ripped it apart, in 1992. The remains — a bright “string of pearls” — hit Jupiter two years later. The first of 21 impacts took place on July 16th, 1994.

The pieces of the comet ranged up to about a mile in diameter. And they were traveling at 125,000 miles per hour. So the impacts generated huge fireballs. The largest, in fact, produced as much energy as six million megatons of TNT — hundreds of times more power than all the H-bombs on Earth combined.

Shoemaker-Levy 9 dramatized the fact that comets and asteroids hit planets fairly often. So a few years later, Congress directed NASA to start looking for objects that are potential threats to Earth. And in 2016, the agency opened a new office to coordinate the searches, and to develop plans for deflecting an object that might threaten us.

So far, no known objects are on a collision course. But as the fireworks of 25 years ago show, no planet is safe from the hazards of the solar system.

Look for Jupiter quite close to the Moon tonight, shining like a brilliant star.