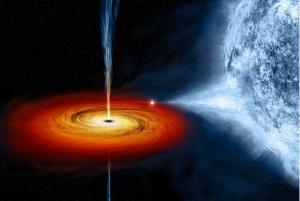 A black hole about 15 times as massive as the Sun strips gas away from a companion star in this artist's concept. The gas forms a hot, swirling disk, which emits copious X-rays. Astronomers named the system Cygnus X-1 because it was the first source of X-rays detected in Cygnus. The system is about 6,000 light-years away. [NASA/CXC/M. Weiss]

Six million years ago, a brilliant star suddenly vanished from view. The star could no longer produce energy in its core to counteract the inward pull of gravity, so it collapsed. Its great mass was crushed to an infinitely small point, then hidden from the outside universe — behind the event horizon of a black hole.

Although it produces no energy at all, this black hole is one of the most intensely studied objects in the galaxy. It’s known as Cygnus X-1 — the first source of X-rays discovered in the constellation Cygnus.

The X-rays come not from the black hole, but from gas that’s been stripped from a bright companion star. As the gas spirals toward the black hole, it’s heated to hundreds of millions of degrees, so it produces copious amounts of X-rays.

Astronomers have been studying the system for almost half a century. But it wasn’t until this decade that they nailed down the details.

They measured the distance to Cygnus X-1 at 6,000 light-years. That allowed them to accurately measure the mass of the black hole — 15 times as massive as the Sun. And they also measured how fast the black hole is spinning — about 800 times per second.

Those numbers helped astronomers calculate when the black hole was born, which indicated how it was born. The original star probably didn’t explode as a supernova, which is the birth process for many black holes. Instead, it simply collapsed — giving birth to a black hole.