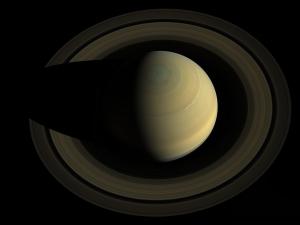 A hexagonal storm system perches atop the planet Saturn in this 2013 image from the Cassini spacecraft. The system, which sits at the north pole, is big enough to swallow Earth, and has been stable for more than four decades. Another giant storm system, shaped like a whirlpool, is at Saturn's south pole. [NASA/JPL/SSI/Cornell]

Saturn is shining at its absolute best right now. The planet lines up opposite the Sun, so it rises around sunset and remains in the sky all night. It’s passing closest to us for the year as well, so it shines at its brightest. It’s low in the southeast as darkness falls. It looks like a golden star, outshined by only a handful of other nightlights.

Saturn is a giant — almost 10 times Earth’s diameter. It’s topped by layers of clouds in shades of yellow, white, and tan. Some of the clouds form whirling vortexes that can be thousands of miles across.

The most impressive of these are anchored to Saturn’s poles. The system at the north pole has six sides, which may stretch hundreds of miles high. The one at the south pole looks like a hurricane, with an “eye” that’s more than half as big as Earth.

The north-pole hexagon has remained stable since it was first seen four decades ago. Each side is wider than Earth. The structure may be a type of wave that circulates around the top of the planet. Another hexagon appeared above it a couple of years ago. That could mean the hexagon towers hundreds of miles high.

The storm at the south pole looks like an earthly hurricane. It has a couple of spiral arms wrapped around a large eye. And like hurricanes, there’s a wall of clouds around the eye. The clouds are dozens of miles tall — outlining a steady “eye” at Saturn’s south pole.

We’ll have more about Saturn tomorrow.