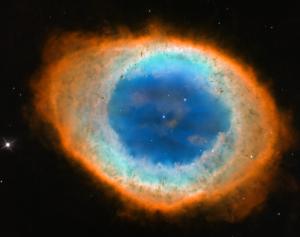 An expanding cloud of gas and dust forms a colorful ring around a dying star in this Hubble Space Telescope view of M57, the Ring Nebula. The nebula is about 2,000 light-years away, in the constellation Lyra.  The nebula is more than one light-year wide. It began forming thousands of year ago, when a star (bright blue dot near center) began expelling its outer layers of gas. The nebula is shaped like a barrel or an hourglass, and we view it from the top. The dark blue color represents the glow of helium, light blue is produced by hydrogen and oxygen, and red is produced by nitrogen and sulfur. [NASA/ESA/Hubble Heritage Team]

The death of a star like the Sun is majestic and beautiful. For a while, the star surrounds itself with an iridescent cocoon of hot gas and dust. Until it dissipates into interstellar space, the cocoon shines brightly enough to see across thousands of light-years.

One of the best-known examples is in the constellation Lyra, the harp. Its brightest star, Vega, is in the east as darkness falls. The remains of a star that was once like Vega stand to its lower right: the Ring Nebula.

You need a telescope to see the nebula, but only because it’s thousands of light-years away. If you moved it to the distance of our closest stellar neighbors, it would outshine all the stars in the night sky. And it would be so big that you’d need your whole hand to cover it up.

The nebula began forming thousands of years ago. As the star aged, changes in its core caused its outer layers to puff outward. Eventually, those layers of gas were pushed off the star and out into space. That left behind only the hot, dense core — a white dwarf. Ultraviolet energy from the white dwarf lights up the surrounding gas like a fluorescent bulb.

Today, the nebula is more than a light-year wide. Seen from Earth, it looks like a pool of blue-green water surrounded by a yellow and pink ring. But it’s actually shaped like a barrel or an hourglass, and we’re looking at it from the top — a beautiful view of a final blaze of glory for a once-mighty star.