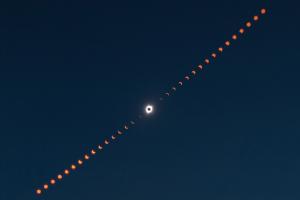 A sequence of photographs shows the progress of the total solar eclipse of August 21, 2017, as the Moon passed in front of the Sun. The Moon will eclipse the Sun again on July 2, although it will be visible only from a narrow band of the southern hemisphere. NASA will provide live video coverage beginning at 3 p.m. EDT. [NASA/Aubrey Gemignani]

One of nature’s most beautiful cycles takes its next step today, with a total solar eclipse. The Moon will line up between Earth and the Sun, blocking the Sun from view. The total eclipse will be visible only from a narrow path. It begins east of New Zealand, crosses the Pacific Ocean, then sweeps across Chile and Argentina. Totality — when the Sun is completely hidden from view — will last up to four and a half minutes.

A Saros is a series of alignments of three different cycles of the Moon. The cycles overlap every 18 years, 11 days, and 8 hours, creating a new eclipse.

The details of each succeeding eclipse in a Saros are similar. The Moon is about the same distance from Earth, for example, and the eclipses happen at the same time of year. Because of the extra eight hours, though, each one takes place a third of the way around Earth from the previous one. So the next eclipse in this cycle will slide across Australia.

A cycle begins with a partial eclipse. With each following eclipse, the Moon covers more of the solar disk, peaking with dozens of total eclipses. Then the Moon slides in the opposite direction, creating more partial eclipses.

Different alignments of Sun, Moon, and Earth create different Saros cycles. So about 40 are under way at any time — giving us two or more solar eclipses every year.