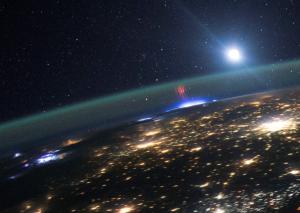 "Red sprites" (near center) blast upward from a thunderstorm in this view from the International Space Station. The Moon is rising just beyond the storm, and the "air glow" of Earth's atmosphere forms a light green band, with the lights of the Dallas-Fort Worth region shining brightly. Scientists have made several discoveries about lightning in recent years, including a possible connection to cosmic rays. [NASA]

A flash of lightning across the night sky is one of nature’s most awe-inspiring sights. But it’s a lot more complicated than it looks. There can be flashes of light above the clouds, too. And there may even be a connection between lightning and exploding stars.

Lightning is triggered when there’s a difference in the electric charge at the top and bottom of a cloud, or between a cloud and the ground. When the difference gets big enough, there’s a discharge, so current flows between the oppositely charged regions. That heats the air, causing it to expand rapidly and create thunder.

In recent decades, scientists have found that other fireworks accompany lightning strikes. “Blue jets” can shoot many miles upward from the cloudtops. Higher still are faint red streamers called sprites. And instruments in space have detected flashes of powerful gamma-rays.

Some research has also suggested a link with cosmic rays. These are the nuclei of heavy atoms blasted into space by exploding stars and other powerful events. When they hit the atmosphere they split apart, triggering showers of other particles. As the particles zip toward the ground, they ram into atoms and molecules in the atmosphere, creating more charged particles. This torrent may create the pathway for a lightning strike.

The idea hasn’t been confirmed, though. So we can’t be sure if lightning has a “cosmic” connection.