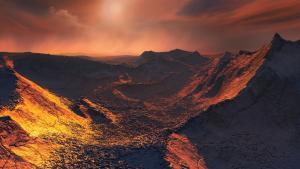 An artist's concept depicts one scenario for the surface of Barnard's Star b, a planet orbiting one of our closest stellar neighbors. The planet is a "super-Earth," about three times Earth's mass, and the second-closest known exoplanet, at a distance of just six light-years. The planet probably is rocky, like Earth, with stronger surface gravity. [ESO/M. Kornmesser]

As astronomers have discovered more planets in other star systems, they’ve gotten more surprises. One of the biggest is a class of planets unlike anything in the solar system. “Super-Earths” are heavier than our own planet, and a little bigger. And they’re quite common. Current catalogs list hundreds of them.

In our own solar system, there are two classes of planets: small and rocky, like Earth, and big and “gassy,” like Jupiter. Super-Earths fall between those extremes. There’s no formal definition for them. But a general definition is any planet between roughly 2 and 10 times the mass of Earth.

The closest super-Earth may be just four and a quarter light-years away. Proxima Centauri b orbits the nearest star to the Sun. Astronomers haven’t been able to nail down the planet’s mass. It could be about as heavy as Earth. But it could also be a few times heavier, putting it solidly in the super-Earth category.

The planet is far enough from its star that it may be too cold for life. But there’s enough uncertainty about conditions that life can’t be ruled out — a “super” possibility for a super-Earth.