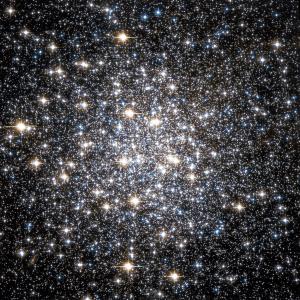 This Hubble Space Telescope view shows the crowded core of Messier 10, a globular star cluster in the constellation Ophiuchus. The cluster contains hundreds of thousands of stars, all packed into a ball-shaped region only a few dozen light-years in diameter. The bright yellowish stars in the image are red giants, which have puffed up as they near the ends of their lives. Such stars shine hundreds of times brighter than the Sun. [ESA/NASA/STScI]

The stars in a binary system can be quite intimate. One star can take material off the surface of its companion, for example. And in extreme cases, the stars can even merge, forming a single star. That can make the stars look a lot younger than they really are.

Many examples of such stars are found in Messier 10. It’s a globular cluster — hundreds of thousands of stars all packed into a ball a few dozen light-years across.

The cluster includes an unusually larger number of blue stragglers — stars that look a lot younger and bluer than the cluster should contain.

The cluster itself is billions of years older than the Sun. It probably was born with many hot, blue stars. But such stars burn out quickly. So there’s no way that any of M10’s original blue stars could still be around.

Instead, the blue stragglers probably were rejuvenated. Some appear to have stolen gas from a companion. The extra material “revs up” the nuclear reactions in the recipient, making it look much younger than it really is.

Other blue stragglers may be the results of binary mergers — the two stars spiral together. That would increase the rate of nuclear reactions as well — turning two old stars into what looks like a brand new one.

Messier 10 is in Ophiuchus, the serpent bearer. The cluster is in the southeast as night falls, well to the upper left of the brilliant planet Jupiter. Through binoculars, it looks like a hazy smudge of light.