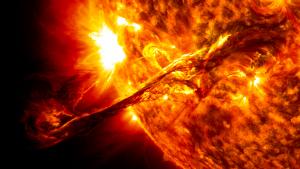 An outburst of charged particles known as a coronal mass ejection erupts from the surface of the Sun in this 2012 image, shot by a satellite at wavelengths that are not visible to the human eye. Such eruptions can blast billions of tons of material toward Earth. When it hits us, it can disrupt satellites and ground power systems and trigger bright aurorae. Scientists recently discovered evidence of a particularly nasty eruption about 2,700 years ago in ice cores and tree rings. [NASA/SDO]

The Sun can turn nasty. But we don’t know just how nasty it can get. Astronomers have been keeping a close eye on it with telescopes for only a couple of centuries. In the lifetime of the Sun, that’s barely the blink of an eye. So scientists are looking farther into the Sun’s past — through tree rings and layers of ice that are hundreds or thousands of years old.

The Sun turns “nasty” when it produces big explosions of energy and charged particles. They can damage orbiting satellites, interfere with aircraft schedules, and knock out power grids on the ground. The largest of these explosions yet seen came in 1859. But no one knows how much bigger such outbursts might get. And that means no one knows how to prepare for the worst the Sun can give us.

Scientists had already found evidence of two big outbursts in tree rings and ice cores — layers of ice pulled up from far beneath the surface. The biggest happened more than 1200 years ago.

A recent study found evidence of a third — about 2700 years ago. Researchers studied ice cores from Greenland. They found high concentrations of a radioactive form of beryllium. They also found high levels of other radioactive elements, both in the ice and in tree rings from that era.

Those elements formed when particles from a solar storm slammed into Earth’s atmosphere. The radioactive elements then fell to the surface — carrying evidence of a powerful blast from the Sun.