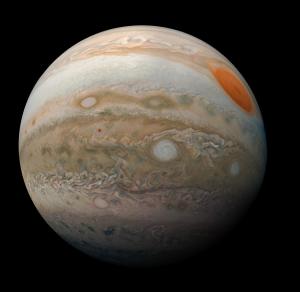 Jupiter's Great Red Spot and several other giant storms highlight this view of the planet's southern hemisphere, compiled from three images from the Juno spacecraft. The images were snapped on February 12, 2019, at ranges of 16,700-59,300 miles (26,900-95,400 km), and have been color- and contrast-enhanced. The Great Red Spot is a storm as big as Earth, although it has been shrinking in recent decades. Bands and zones of clouds feature smaller storms. Jupiter, which is the solar system's largest planet, shines at its brightest in early and mid June as it lines up opposite the Sun. It looks like a brilliant star and remains in view all night. [NASA/JPL/SwRI/MSSS/Kevin M. Gill]

A brilliant beacon is rolling low across the southern night sky right now. For most of the night, it outshines everything else except the Moon, so you won’t have any trouble finding it.

Jupiter is the largest planet in the solar system. It’s about 11 times Earth’s diameter, and more than 300 times its mass.

That great size is just one of the factors that make Jupiter so brilliant. Another is that the clouds that top its atmosphere reflect most of the sunlight that strikes them. And a third is the planet’s distance. Right now, it’s passing closest to us for the entire year, at less than 400 million miles.

Still, that’s a long way out. It takes years for a spacecraft to reach the giant planet. And it takes a long time for Jupiter to orbit the Sun — about 12 years. So as seen from Earth, that’s how long it takes Jupiter to make one turn against the background of stars.

The combination of Jupiter’s regal pace and its brilliant visage earned the planet its name. Jupiter was the king of the gods of ancient Rome — lording over the solar system as well as his fellow gods.

Jupiter is lining up opposite the Sun in our sky now. It rises around sunset, and is low in the southeast as night falls. It scoots low across the south during the night, and sets in the southwest around sunrise. It’s brightest for the year, too — a brilliant beacon in view all night long.

We’ll have more about Jupiter tomorrow.