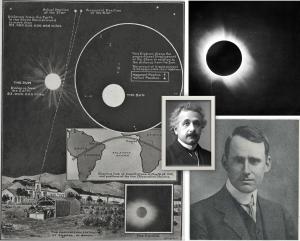 Albert Einstein (center) became world famous even without social media after the results of observations of the solar eclipse of May 29, 1919 (upper right), were published later that year. Einstein's theory of gravity, General Relativity, predicted that, during an eclipse, the positions of stars that appeared near the Sun would be deflected slightly by the Sun's gravity. (See diagram at left, published in late 1919). Sir Arthur Eddington (lower right) led one of two British expeditions to observe the eclipse, as well as the effort to analyze the observations. The analysis confirmed Einstein's predictions, turning the German scientist into an international celebrity. Some later analyses questioned Eddington's results, but work in recent years seems to confirm his results. In any event, General Relativity has been confirmed in many other tests since then.

When the year 1919 began, Albert Einstein was a little-known German physicist. By year’s end, though, he was an international celebrity — probably the most famous scientist in the world. The difference? A total solar eclipse that took place 100 years ago today.

A few years earlier, Einstein had published his theory of gravity, known as general relativity. Among other things, it said that mass causes space-time to curve. That could be confirmed during a solar eclipse. As light from background stars passed close to the Sun, it would be deflected a tiny bit. That would make the stars appear to be out of their normal positions.

Frank Watson Dyson, Britain’s astronomer royal, proposed testing that idea during the solar eclipse of May 29th, 1919. So two expeditions headed out to watch it. Arthur Eddington, another top British astronomer and an admirer of Einstein’s work, led a group to an island off the coast of Africa. The other group went to Brazil.

Weather conditions weren’t the best. Clouds and rain blocked part of Eddington’s view. And the heat in Brazil warped the mirror of the Brazilian group’s main telescope. Even so, both groups got some observations. They then spent months analyzing their findings. They reported that their observations were a good match to Einstein’s theory. Einstein appeared on the front pages of newspapers around the world — making him an instant celebrity.