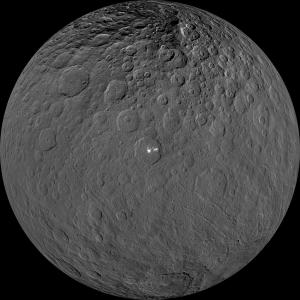 The Dawn spacecraft provided this view of Ceres, the largest member of the asteroid belt. Occator Crater, at the center of the disk, contains bright mounds of salts, which may have been deposited when briny water from below the surface pushed upward through cracks in the crust. Ceres is putting in its best showing of the year in late May, although you still need binoculars or a telescope to pick it out. [NASA/JPL/UCLA/MPS/DLR/IDA]

A planet that never was is putting in its best appearance of the year this week. It lines up opposite the Sun, so it’s in the sky all night. It’s brightest for the year, too, although you still need binoculars to find it.

Ceres is the largest member of the asteroid belt, between the orbits of Mars and Jupiter. It\'s about 600 miles in diameter — roughly a quarter the size of the Moon.

Ceres is put together more like a planet than like the other objects in the asteroid belt. It consists of a series of layers — a solid core, surrounded by a mantle of ice, topped by a crust of ice and rock.

Scientists aren’t sure just where Ceres was born. Its composition suggests it might have formed beyond the realm of the planets, then migrated inward to its current location. But it’s also possible that it formed right where it is.

Either way, it probably was prevented from growing any bigger by nearby Jupiter. The gravity of the giant planet kept all the other material in the asteroid belt stirred up. That kept Ceres from pulling in smaller bodies and adding to its own heft. So Ceres remained fairly small — bigger than an asteroid, but too small to be a full-fledged planet.

Ceres is straddling the border between Scorpius and Ophiuchus right now. As darkness falls, it’s to the upper left of Antares, the bright orange star that marks the scorpion’s heart, by about the width of your fist held at arm\'s length — a tiny planet that never was.