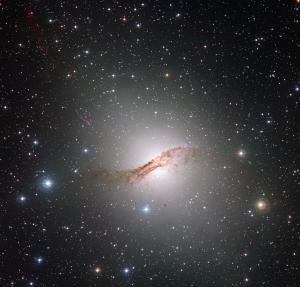 Lanes of dark dust punctuated by bright stellar nurseries highlight the center of Centaurus A, a distant galaxy that is one of the brightest in the night sky. The galaxy, also known as NGC 5128, also is a major source of radio waves. They come from the galaxy's core and from "jets" that shoot into space above and below the core. The dust lanes and radio waves suggest that Centaurus A may be the result of a recent merger between two smaller galaxies. [ESO]

Centaurus A is the fifth-brightest galaxy in the night sky, so it’s an easy target for telescopes and binoculars. But it’s what they can’t see that makes Centaurus A one of the most interesting galaxies around.

Images of the galaxy show a bright blob of stars with wide, dark dust lanes in front of it. That suggests that Centaurus A is the result of a recent merger between two galaxies. New stars are being born in bunches along the dust lanes.

In 1949, radio astronomers found that the galaxy was one of the “loudest” around. The radio waves come from the galaxy’s core and from “jets” that shoot into space above and below the core. They’re almost two million light-years long.

As seen from the United States, Centaurus A stands almost due south as night falls now. It’s best viewed from south of about Dallas or Albuquerque, where it stands a little higher in the sky. Through binoculars, the galaxy looks like a hazy patch of light. It’s just a few degrees above Omega Centauri, a bright star cluster. More about that tomorrow.