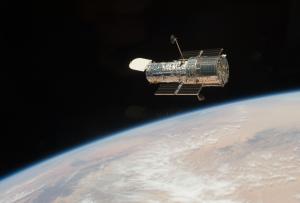 Hubble Space Telescope flies free after its final servicing mission, in May 2009. Astronauts aboard space shuttle Atlantis installed new cameras and a new spectrograph, replaced its gyroscopes and batteries, and conducted other repairs and upgrades. They released the telescope on May 19. [NASA]

We got our final look at Hubble Space Telescope 10 years ago this weekend. Astronaut Megan McArthur released it from the robotic arm of space shuttle Atlantis. That completed almost a week of orbital repairs and upgrades.

The crew of Atlantis conducted five spacewalks during Hubble’s final service call. The astronauts installed a new camera and a new spectrograph, which studies the universe at ultraviolet wavelengths. And they repaired two failed instruments.

The astronauts also replaced Hubble’s 18-year-old batteries, and installed six new gyroscopes to keep it pointed in the right direction. And they did additional repairs and upgrades to return it to tip-top shape.

The mission was one of the most complicated in shuttle history. The delicate operations required many months to plan and rehearse. And astronauts and ground crews had to improvise when things didn’t go according to plan. Mission Control praised the astronauts as the shuttle landed.

A decade later, three of the new gyros have failed, and Hubble is showing other signs of its age. Even so, it continues to expand our knowledge of the universe more than a quarter century after its launch.