Holes in the Ground 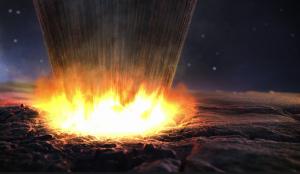 This artist's concept shows an asteroid slamming into Greenland thousands of years ago. The collision left a crater that was recently discovered beneath a glacier. [NASA/GSFC/Visualization Laboratory]

It’s not easy to find impact craters on Earth. Most of these cosmic scars have been erased by wind, rain, and the motions of Earth’s crust. As a result, only a couple of hundred have been cataloged.

But the list is growing in a hurry. In recent months, geologists have confirmed three new craters, and found evidence of a fourth.

One of the discoveries was in Western Australia, a desert region where craters are common. The new one is up to 10 miles in diameter, and it probably formed about 85 million years ago. Researchers confirmed the crater by examining quartz crystals in rocks below the desert floor. The crystals were “shocked” — they’d been smashed by a heavy blow, like that delivered by a space rock slamming into Earth.

A similar effect was seen in samples of black glass at a site in Nicaragua. The site was already a suspected crater — it’s a round hole in the ground with many of the features found in confirmed craters. The rock samples seal the deal. The crater is about eight miles across, and formed less than a million years ago.

Evidence of two craters has been found beneath the glaciers of Greenland. One has been confirmed with multiple lines of evidence. The other is probably a crater, but it’s not possible to get at its rocks to confirm it. Instead, it’s been seen in scans that look through the ice. They show that the possible crater is more than 20 miles in diameter — the possible scar of an ancient collision.