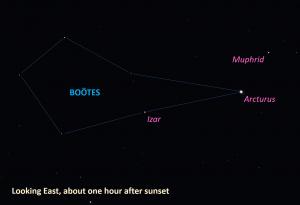 The constellation Bootes, the herdsman, climbs high across the sky on spring and summer nights. It is well up in the east at nightfall now, marked by its brightest star, Arcturus, which is one of the brightest stars in the night sky. Well to its left is Izar, a binary system whose two stars are separated by billions of miles.

Most stars move through the galaxy with at least one stellar companion. These siblings are bound to each other by their gravitational pull. But just how close they are varies by quite a bit. Some stars are so close that they’re actually touching. Others are separated by billions of miles.

An example of such a distant binary is Izar, the second-brightest star of Bootes, the herdsman. The constellation is half way up the eastern sky at nightfall. Its leading light is yellow-orange Arcturus, one of the brightest stars in the night sky. Izar is to the left of Arcturus, and is easy to pick out.

Izar consists of two known stars. The more prominent one is at the end of its lifetime, so it’s puffing up to enormous proportions. That’s made it especially bright — 500 times brighter than the Sun. It’ll get even bigger and brighter over the next few million years. Eventually, it’ll expel its outer layers of gas into space, surrounding itself with a colorful bubble.

If the star’s companion was close by, those changes might affect it as well. Instead, though, the star is about 17 billion miles away — almost 200 times farther than Earth is from the Sun. At that range, it’ll feel little effect from its dying companion. Its surface will get a little hotter, and it will pull in a little of the dying star’s gas. Otherwise, though, it’ll continue shining on its own, until it begins its own death throes — sometime in the distant future.