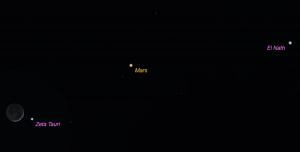 Mars in the Middle

The crescent Moon anchors a lineup of bright objects in the early evening sky of May 7. The closest companion is Zeta Tauri, in Taurus, the bull. El Nath, to the upper right of the Moon, stands at the tip of one of the bull's horns. [Damond Benningfield/Stellarium]

The crescent Moon anchors a pretty lineup of stars and planets this evening. One of the stars will be so close to the Moon that it will look like they could reach out and touch each other.

The more prominent of the Moon’s companions are the planet Mars and the star Beta Tauri, also known as El Nath. Mars looks like a fairly bright orange star to the upper right of the Moon. El Nath is a little farther to the right of Mars. It’s about the same brightness as Mars right now.

El Nath is much bigger and heavier than the Sun, and hundreds of times brighter. Its claim to fame, though, is its position in the sky. It’s the closest bright star to the point that’s opposite the center of the Milky Way galaxy. So when we look in that direction, we’re looking into the sparse outer regions of the galaxy’s disk.

The Moon’s closest companion is Zeta Tauri. It’s only about a third as bright as Mars and El Nath. But it’s right next to the Moon, which helps it stand out.

Zeta Tauri consists of two stars. The main one is about 11 times the mass of the Sun. At that great heft, it’s likely to end its life as a supernova — a titanic explosion that’ll blow it to bits.

The other star is about the same mass as the Sun. It’s so close to the main star, though, that astronomers can’t see it through the glare. So they can’t tell whether it’s a “normal” star like the Sun, or a stellar corpse — perhaps the remnant of another supernova that exploded long ago.