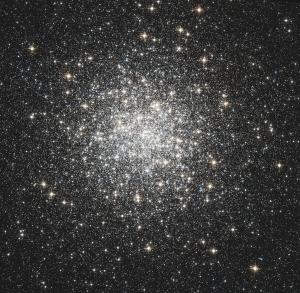 A Hubble Space Telescope image shows the busy center of Messier 3, a globular cluster about 30,000 light-years from Earth. The cluster's stars are so tightly packed that the skies of an orbiting planet would be filled with many more stars than Earth's night sky, with many stars visible even in daylight. [NASA/ESA/STScI/A. Sarajedini (Univ. Florida)]

If you drew a bubble around the Sun 10 light-years wide, it would contain only three other stars — the triple system known as Alpha Centauri.

If you drew the same-sized bubble around a star near the center of Messier 3, though, it would contain many thousands of stars. The night sky of an Earth-like planet there would be ablaze with stars — enough to keep the night from getting truly dark. And some stars would be visible even in the daytime.

Messier 3 is a globular cluster — a ball-shaped collection of perhaps half a million stars that’s only a few hundred light-years across.

The cluster probably formed when the Milky Way was quite young. So its stars are all old, and most of them are feeble. They’re so tightly packed, though, that the view from inside the cluster would be spectacular.

And if you could see through all those stars, the view beyond the cluster would be even better. That’s because M3 is about 30,000 light-years above the plane of the galaxy’s disk. So any residents of the cluster would get a view of the Milky Way that looked like something out of a textbook — the grand expanse of our beautiful spiral galaxy.

M3 is a pretty nice sight on its own. It’s high in the east at nightfall. It’s to the upper left of the bright star Arcturus, by a little more than the width of your fish held at arm’s length. Binoculars reveal the cluster’s glow, while a small telescope shows some of its individual stars.