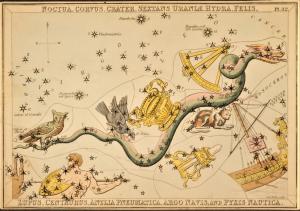 An 1825 illustration depicts Hydra, the water snake, and the surrounding constellations. Corvus and Crater sit atop its back. In mythology, the god Apollo dispatched the crow to fetch some water in Crater (the cup). The crow was distracted by a fig tree, then blamed his tardiness on a snake. The angry Apollo hurled all of them into the sky. [Sidney Hall]

A pair of ancient but faint constellations flows across the southern evening sky at this time of year. The two of them share a common story, which also involves a third constellation.

Corvus and Crater have been around for more than two millennia. Their story, in fact, comes from ancient Greece.

According to the myth, the god Apollo sent Corvus, the crow, to fill a cup — known as a crater — with water from a nearby spring. On the way, the crow saw a tree filled with unripe figs. Instead of fetching the water and coming back later, he waited for the figs to ripen. When they did, he gorged on the delicious fruit.

Corvus knew that Apollo wouldn’t be happy with him. So he filled the cup with water, then grabbed a water snake in his talons. He brought both back to Apollo, and blamed the snake for blocking his way. But Apollo wasn’t fooled. Instead, he was angry and vengeful. He cast crow, cup, and snake into the heavens, forming three constellations. As extra punishment, he decreed that the crow would suffer from thirst — with the water-filled cup forever just out of reach.

The constellations are in the southeast at nightfall right now. Corvus contains four moderately bright stars that form a shape that resembles a sail. Crater, to the upper right, looks like a goblet — but you need really dark skies to see it.

Both of them sit on the back of poor Hydra, the water snake — an innocent victim of the wrath of the gods.