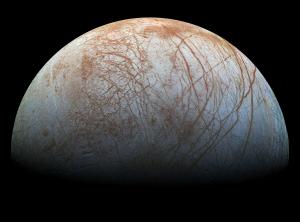 Grooves and cracks criss-cross the icy surface of Europa, one of the larger moons of Jupiter. Scientists suspect that a global ocean of liquid water lies beneath the ice. NASA and the European Space Agency are planning missions to Europa, to launch in 2022 or later. Engineers are even planning ways to tunnel through the ice to sample Europa's ocean. This near-true-color view was compiled from several images from the Galileo spacecraft. [NASA/JPL/SETI Institute]

Anyone who likes to do a little ice fishing might consider Europa, one of the bigger moons of Jupiter. It has a global ocean that’s dozens of miles deep, capped by ice that’s miles thick. And there’s a chance the ocean could be inhabited — most likely by microscopic organisms, but perhaps by bigger ones.

Europa is a bit smaller than our own Moon. Its surface is made of blocks of ice that are criss-crossed by veins of a reddish material. That structure, along with several other lines of evidence, point to the hidden ocean.

It’s possible that hot, mineral-rich water could percolate into the bottom of the ocean, providing the ingredients for life: water, chemistry, and energy.

Two missions are scheduled to head for Europa soon. A European craft will launch in 2022, with an American one following as little as a year later. The American craft will swoop as low as 15 miles above the surface.

Landing on Europa might be tricky. A recent study said that spikes of ice several stories tall could ring the moon’s equator. Yet scientists are already pondering missions that would peek into the ocean. One concept — a “tunnelbot” — would use nuclear power to melt through the ice — allowing it to “fish” for life on this amazing moon.

Look for Jupiter quite close to our own Moon late tonight. Jupiter is just below the Moon as they rise, after midnight, and looks like a brilliant star. They’ll be even closer at first light.