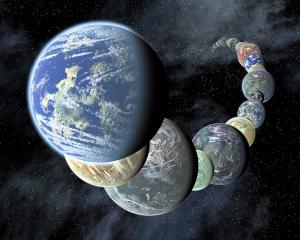 Astronomers have discovered about 4,000 confirmed planets in other star systems, including a few that could be similar to Earth. This artist's concept depicts what other Earth-sized planets might look like, with some of them perhaps covered with oceans and populated by living organisms. [NASA/JPL/R. Hurt (SSC-Caltech)]

Our solar system is an oddball. The way it’s laid out is different from every other planetary system yet discovered. In part, that’s probably because solar systems like ours are harder to find. But it also means that there’s no template for how a planetary system should look.

The solar system consists of eight planets. The closest to the Sun is Mercury, at roughly a third of the distance between the Sun and Earth. The most distant planet is Neptune, 30 times farther than Earth is. The four inner planets are small and rocky, while the outer planets are big and either gassy or icy.

Most of the other known systems consist of only one or two planets. Most of them are quite close to their parent stars — often much closer than Mercury is to the Sun. Some of these planets are much heavier than Jupiter, the giant of the solar system. But they’re so close in that they’re blazing hot.

Several systems contain at least six planets, with some topping out at eight. In most of these, the planets are all packed tight. In some cases, all the planets are closer in than Earth is to the Sun.

And many planets in other systems are unlike anything in our own. They’re between the mass of Earth — the biggest of the little worlds — and Neptune — the smallest of the big worlds. The fact that the solar system has none helps solidify its standing as an oddball — a system that’s different from all the rest.