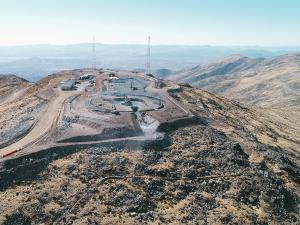 Workers prepare the site for the future Giant Magellan Telescope in Chile. The project is a major feat of civil engineering, requiring the construction team to level the top of the mountain, Las Campanas; dig deep trenches for the piers that will support the telescope, and help protect the telescope from possible earthquakes. When completed, GMT will be the world's largest telescope. [Copyright GMT Collaboration]

A giant telescope is a marvel of science and engineering — tons of glass and steel that are molded into an impressive scientific instrument.

But it's also a marvel of civil engineering — years of work just to get the site ready for construction.

Consider GMT — the Giant Magellan Telescope. When it's finished, it'll be the largest telescope in the world, with a main mirror almost as big as a basketball court. It's being built atop Cerro Las Campanas, an 8200-foot mountain in Chile.

The mountain isn't quite as tall as it once was, though. The first step of construction was to level the rounded peak. So teams blasted about 30 feet off the top of the mountain. They carted away about 50,000 cubic yards of rock.

The crop job changed the way air flows over the mountain, which could affect viewing conditions for the telescope. So the GMT project spent several years monitoring the changes and simulating airflow with computer models.

When that was done, they started excavating the base of the telescope dome. Piers have to be sunk deep into the bedrock to keep the telescope stable. Builders can't use explosives, though, because they might crack the rock. The digging takes months, and will remove thousands more cubic yards of rock and dirt.

After that, the construction team will be ready to start building the telescope and its dome — another major feat of engineering.