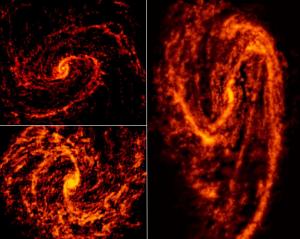 Vast nurseries that are giving birth to thousands or even millions of stars highlight the spiral arms of these galaxies imaged by ALMA, a telescope array in Chile. Clockwise from top left, the galaxies are Messier 100, Messier 66, and Messier 61. M66 has been disturbed by a gravitational encounter with another galaxy, which squeezed its gas clouds to the point that they began forming more stars. [ALMA (ESO/NAOJ/NRAO); NRAO/AUI/NSF, B. Saxton]

Most galaxies of any appreciable size are giving birth to new stars. But some are a lot better at it than others. In fact, early results from a survey of star-forming galaxies suggests that smaller ones are better at it than bigger ones.

Stars are born from stellar nurseries — collapsing clouds of gas and dust. The clouds break apart into smaller clumps that then form stars. Individual nurseries can give birth to anywhere from a few stars to hundreds of thousands of them.

Astronomers are using an array of radio telescopes to study more than a hundred thousand nurseries in 74 large galaxies. The array, known as ALMA, is in Chile, so it's looking at galaxies that are visible from the southern hemisphere. The galaxies are all fairly close, and we see them pretty much face-on. That provides a detailed look at their gas clouds.

Early results indicate that nurseries in smaller galaxies are more efficient at making stars — they convert more of the gas into stars in a shorter time.

Astronomers aren't sure why that\'s the case. One idea is that as big galaxies get older, they get more stirred up. That spreads out their gas, so it's harder for it to come together to make stars.

The survey isn't done yet, though. As astronomers look at the remaining galaxies — and analyze the rest of their data — they may come to a more complete understanding of why some galaxies are better at making stars.