There’s a lot of talk these days about sending people to the Moon and Mars — not just for a few days, but for weeks or longer.

Such expeditions won’t be able to get all the supplies they need from Earth. Instead, they’ll need to live off the land. They might use ice to provide drinking water, oxygen, and rocket fuel, for example.

And they might be able to use the dirt, too. In fact, research teams around the world are making simulated Moon and Mars dirt for testing.

The dirt could be used to make bricks and other building materials. They would protect explorers against radiation from the Sun and beyond.

The European Space Agency, for example, has been making bricks from a lunar simulant — a material that has similar characteristics to the real thing. Real lunar dirt may be especially hard to deal with because much of it is electrically charged. Combined with some of the physical properties of the dirt, that makes it obnoxious — it sticks to everything, and could jam up equipment.

Mars dirt might be similarly tough to deal with. But engineers can test their building techniques using a simulant developed by the University of Central Florida. It sells for about 10 dollars a pound — a down payment on trips to Mars.

And Mars is easy to spot the next couple of evenings. It’s in the west at nightfall, and looks like a fairly bright orange star. It’ll stand well above the Moon tonight, and closer to the Moon tomorrow night. 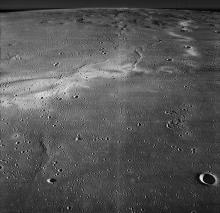