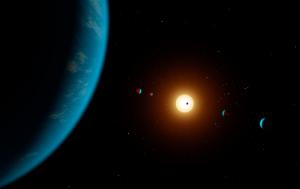 Planets by the Half-Dozen

This artist's concept depicts a family of six planets orbiting K2-138, a cool orange star that's almost as big as the Sun. The sixth planet, which was hinted at by the planet-hunting Kepler space telescope, was recently confirmed with another space telescope. All of the planets are closer to their star than Mercury, the innermost planet in the solar system, is to the Sun. [NASA/JPL/Caltech]

Astronomers recently reported the sixth planet orbiting a star in the constellation Aquarius. Known as K2-138g, it’s been classified as a “sub-Neptune” — a planet that’s bigger than Earth, but smaller than Neptune, the Sun’s outermost planet.

That brings the number of systems with at least six known exoplanets to nine. And most of those worlds were discovered with the most successful planet hunter to date: the Kepler space telescope, which was launched 10 years ago and wrapped up its mission late last year.

Kepler looked for a planet to transit — to pass in front of its parent star, briefly dimming the star’s light by a bit. Analysis of the event, combined with follow-up work by other telescopes, provides details on the planet.

K2-138 consists of a cool orange star that’s almost as big as the Sun. Volunteers in a crowdsourcing project sorted through Kepler’s observations of the system and discovered five planets. All of them are closer to the star than Mercury is to the Sun.

The project also found evidence of a sixth planet. But Kepler shut down before it could confirm the planet. So astronomers aimed another space telescope at the system, and saw another transit — confirming the sixth planet.

Planet “g” orbits the star every 42 days, well outside the orbits of the other five. It’s about two-thirds the diameter of Neptune. It’ll take more study, though, to uncover more details about one of Kepler’s most recent discoveries.