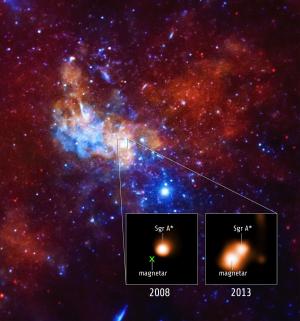 A star that generates a magnetic field that could be a trillion times stronger than Earth's lurks near the supermassive black hole at the center of the Milky Way galaxy. This image shows an X-ray view of the galaxy's core, with insets showing the view near the supermassive black hole (known as Sagittarius A*, SGR A* for short) in 2008 and 2013. The magnetic star, known as a magnetar, was quiet during the 2008 observations, but was producing an enormous burst of X-rays in 2013 which led to its discovery. [NASA/CXC/INAF/F. Coti Zelati et al.]

The center of the galaxy is dangerous. It’s dominated by a supermassive black hole. And to make things more hazardous, one of its closest neighbors is a magnetar — the ultra-dense corpse of a once-mighty star. It spins once every 3.8 seconds, emitting a “pulse” of energy with each spin. That makes it a pulsar. And it has a magnetic field that may be a trillion times stronger than Earth’s — fatal at a range of thousands of miles.

Quite a few pulsars inhabit the galaxy’s core. But the magnetar is the closest one to the black hole. Astronomers are trying to find out if there's a connection — if there's something about the environment near the black hole that favors the formation of a magnetar.

Using a giant radio dish in Australia, they’ve already found that the magnetar’s pulses are spread out — like looking at a bright light through frosted glass. That could mean that the pulses are passing through a cloud of charged particles. And there’s a difference between pulses, which could be revealing details about how the magnetar works.

We can't see the galaxy’s heart because it’s behind clouds of dust. But we can see its location. It’s above the “spout” of the teapot formed by the stars of Sagittarius, which is low in the southeast at first light. And right now, the brilliant planet Jupiter is passing in front of the core — pointing the way to the galaxy’s dangerous heart.