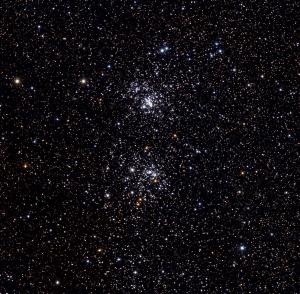 A pair of star clusters, collectively known as the Double Cluster, shines from the constellation Perseus. Known individually as NGC 884 and NGC 869, the clusters are about 7,500 light-years from Earth. They're especially bright because they are quite young, so they still contain some especially vigorous young stars. [Genuson/Wikipedia]

One of the jewels of the winter Milky Way stands high in the northwest this evening. It’s actually two jewels that are quite close together — a pair of star clusters known as the Double Cluster. And they really do represent jewels — the jeweled handle of the sword of Perseus, the hero.

Individually, the clusters are cataloged as NGC 884 and 869. Although they were known to ancient skywatchers, their true nature wasn’t discovered until the 18th century, when William Herschel studied them through a telescope.

Both clusters are about 7500 light-years away. Quite a few clusters are closer, but not many of them are brighter. That’s because both members of the Double Cluster appear to be less than 15 million years old. At such a young age, they still contain some heavy stars, which burn especially hot and bright. Such stars burn out quickly, though, leaving their parent clusters with less-massive stars that shine longer but less brightly.

Under dark skies, the Double Cluster is easily visible to the unaided eye, immersed in the faint glow of the Milky Way. It’s a smudge of light above Cassiopeia, whose brightest stars form the outline of a letter M or W. But the clusters really shine when you view them through binoculars, which reveal the individual clusters as well as dozens of their individual stars — some extra jewels for the sword of the hero.