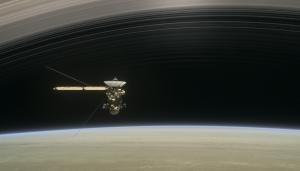 The Cassini spacecraft passes between Saturn and its beautiful rings in this artist's concept of the craft's final days. Cassini passed inside the rings 22 times, providing new details on the mass and structure of the rings and their interactions with Saturn itself. Cassini discovered that ring particles are being guided toward Saturn's mid-latitudes by the planet's magnetic fields. The "rain" is enough to deplete the rings in just 300 million years. When combined with a heavier rain onto the equator, though, the rings could disappear in just 100 million years. [NASA/JPL]

Beauty doesn’t always last. Consider the rings of Saturn. These bands of ice and dust are among the most beautiful features in the solar system. Yet they may be doomed — they could disappear in a few hundred million years.

The rings are constantly changing. Collisions pulverize larger chunks of material, while smaller bits can stick together to form bigger ones — all the way up to the size of small moons.

And ring particles “rain” onto Saturn, adding water to the planet’s atmosphere — which is why the rings may disappear.

Researchers recently took a new look at some old observations of Saturn. They found changes in the planet’s ionosphere — a layer of the atmosphere that contains particles with an electric charge. The changes correspond to dark bands in Saturn’s atmosphere seen in other observations.

The changes may be caused by bits of ice in the rings falling toward Saturn. The particles have their own electric charge, so they’re guided by Saturn’s magnetic field. As they hit the atmosphere, they wash away particles of haze — leaving dark bands.

The researchers calculated that this icy “rain” could make the rings vanish in about 300 million years — only a few percent of the age of Saturn itself.

Saturn just peeks into view at dawn right now. Tomorrow, it’ll stand to the upper right of the Moon, with brilliant Venus close to the left of the Moon. They’ll be in view by about an hour before sunrise, low in the southeast.