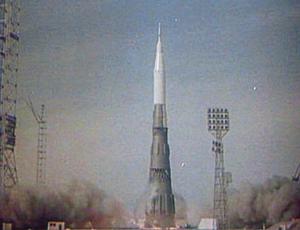 The 30 first-stage engines of the Soviet Union's N1 rocket light up for the booster's first flight on February 21, 1969. The N1 was designed to carry cosmonauts to the Moon. Leaking fuel lines and other problems doomed this inaugural flight. The engines shut down 68 seconds after launch and the booster slammed into the Kazakhstan plains two minutes later. Three other test flights all ended in failure as well, and the final two boosters were scrapped. [Russianspaceweb.com]

One of the most powerful rockets ever built made its first flight 50 years ago today. It was designed to carry cosmonauts to the Moon. Instead, it was a rocket to nowhere. All four of its test flights failed, and the remaining boosters were scrapped.

The N1 was the Soviet Union’s answer to the American Saturn 5 Moon rocket. But its development was plagued by problems. Soviet leadership didn’t provide enough money, and often meddled in the space program. The agencies that built rockets and spacecraft fought with each other, with their leaders trying to sabotage the others.

So when the first N1 stood on its launchpad in Kazakhstan, it wasn’t ready to fly. But America had already sent three astronauts around the Moon, and was planning to land on the Moon in a few months. So the Soviets didn’t want to fall too far behind.

The first stage of the N1 was powered by 30 engines, which proved to be a problem. When the first model lifted off, on February 21st, 1969, two engines shut down within seconds. Vibrations damaged another engine, which began leaking. Seconds later, another leak developed, filling the engine compartment with propellants, which caught fire. The control system shut down the other engines just 68 seconds after launch. The dead booster hit the ground two minutes later.

Three other test flights failed as well. The N1 was done — and so was the Soviet Union’s effort to send cosmonauts to the Moon.