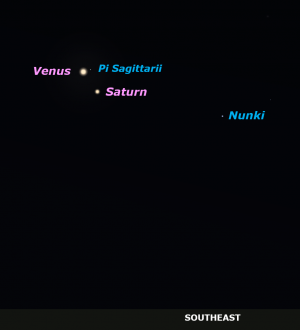 The planets Venus and Saturn will share the dawn sky for a few days. This is the configuration on February 18, about one hour before sunrise. A few stars of Sagittarius may be visible as well, including one that's especially close to Venus. Venus and Saturn will stand side by side on February 19, with Saturn to the upper right of Venus on the 20th.

A planetary mismatch highlights the dawn sky right now, but things aren’t quite as they appear.

Venus and Saturn will pass each other over the next three days. Venus is the dazzling “morning star,” so you can’t miss it. It’ll overpower the other planet, Saturn, which looks only about one percent as bright.

That mismatch is an illusion, though. Saturn actually is by far the more impressive of the two planets. It looks more feeble because it’s about 900 million miles farther away.

Saturn is the second-largest planet in the solar system — a ball of gas more than nine times Earth’s diameter. It’s encircled by broad, brilliant rings. They consist of bits of ice, rock, and dust that reflect a lot of sunlight. The rings are so bright, in fact, that when they’re tilted at a steep angle, they just about double Saturn’s brightness.

Venus, on the other hand, is a bit smaller than Earth. It’s the second planet out from the Sun, though, so it receives and reflects a lot of sunlight. And since it’s our closest planetary neighbor, a lot of that light reaches Earth, making the planet shine brightly.

Look for Saturn standing close below Venus tomorrow, by about the width of a finger held at arm’s length. By Tuesday, the two worlds will stand side by side. And by Wednesday, Saturn will be to the upper right of Venus. Saturn will pull away from Venus on the following days, beginning a long climb across the night sky.