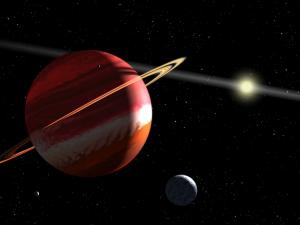 An artist's concept shows Epsilon Eridani b, a Jupiter-like planet orbiting the star Epsilon Eridani. The system is just 10.5 light-years away, and is the nearest star visible to the unaided eye with a known exoplanet. Several known planets are closer, but their stars are too faint to see without a telescope. Epsilon Eridani b is so far from its star, though, that it is quite cold, so it's not considered a good home for life. [NASA/ESA/G. Bacon]

The nearest star system visible to the unaided eye that has a known planet scoots across the southern sky on winter evenings. Epsilon Eridani is in the south at nightfall, although you need dark skies to see it.

The star is 10 and a half light-years away — right next door. It’s orbited by at least one planet. It’s not a good place to look for neighbors, though. The planet is a gasball similar to Jupiter, the giant of our own solar system. And it’s so far from Epsilon Eridani that it’s quite cold — not a likely haven for life.

Only a couple of other stars with known planets are closer to Earth. And both of those stars are so faint that you need a telescope to pick them out.

One is Proxima Centauri. It’s the Sun’s closest neighbor, at just 4.2 light-years. Its planet is about the same size as Earth. And it’s at the range from the star where temperatures should be just right for liquid water. But the planet is bathed in radiation and a strong wind from the star. That could strip away any atmosphere and sterilize the surface.

And late last year, astronomers reported the discovery of a planet around the second-closest star system, Barnard’s Star. The planet is about three times as massive as Earth, so it’s probably a ball of rock. It’s so far out, though, that it should be frozen solid — too cold for life like that on Earth — one more world where we’re not likely to meet any neighbors.