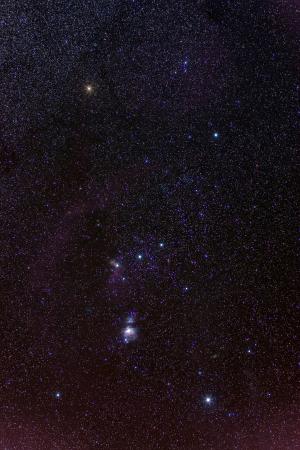 Orion is one of the most prominent and beautiful of all constellations. Features include the bright orange star Betelgeuse (upper left), the blue-white star Rigel (lower right), Orion's Belt (three stars at center), and the Orion Nebula (fuzzy zone below the belt). Betelgeuse and Rigel are often featured in science fiction, but neither star would be a good home for life. And if life has evolved at either star, it's doomed: both are destined to explode as supernovae. [Mouser/Wikipedia]

Two of the biggest and brightest stars in the galaxy flank Orion’s Belt, which is in the southeast at nightfall. Orange Betelgeuse is to the upper left of the belt, with blue-white Rigel to the lower right.

Both stars are popular in science fiction. They’ve appeared in dozens of books, TV shows, and other media. Betelgeuse, for example, was featured in the original “Planet of the Apes” novel. And Rigel was featured in several episodes of “Star Trek,” as well as in a series of stories by Isaac Asimov.

In reality, though, neither star would be a good home for life — or even planets. Both stars probably are less than 10 million years old, for example, so there probably hasn’t been enough time for planets to form and give rise to life at either of them.

And even if planets did form, Betelgeuse is so big that if it took the Sun’s place in our own solar system, it would extend to the asteroid belt and maybe beyond. To be habitable, a planet would have to be billions of miles away from the star.

Rigel isn’t as big as Betelgeuse, but it’s much hotter. So a planet would have to be much farther away to be habitable. And like Betelgeuse, Rigel produces a strong wind that could damage the atmosphere of a nearby planet.

And to make things even worse, time is about up for both stars. Within a couple of million years, both are likely to explode as supernovae — really bad news for any planets around these impressive stars.