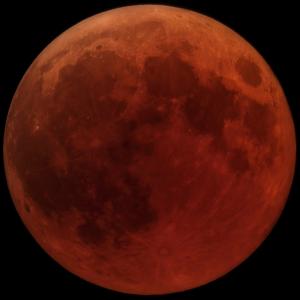 The Moon will be fully eclipsed on the night of January 20, perhaps showing the same dark orange color as during this 2018 eclipse. The Moon will be totally eclipsed for about an hour as it passes through the dark central portion of Earth's long shadow. The eclipse occurs at full Moon, which this month is known as the Wolf Moon or Moon After Yule. [Giuseppe Donatiello]

In a bit of a coincidence, a total lunar eclipse will shine through American skies for the second January in a row. The entire eclipse will be visible from all of North America, with Hawaii seeing most of the action as well.

It doesn’t turn completely dark, though. Instead, sunlight filtering through Earth’s atmosphere casts a deep orange or red glow. The color shows up easily in photographs. But when an eclipse is viewed live, the intensity of the color depends on the viewer’s color vision, weather conditions, and other factors.

This eclipse gets under way at 9:34 p.m. Central Time tonight. That’s when the lunar disk first touches the edge of Earth’s dark inner shadow, known as the umbra. The early portion of the eclipse is only partial, as the Moon moves more deeply into the shadow. It will take about an hour to become fully immersed in the shadow, creating the total eclipse. The Moon will remain fully eclipsed for an hour. It will exit the umbra about an hour after that, allowing the full Moon to return to its full glory.