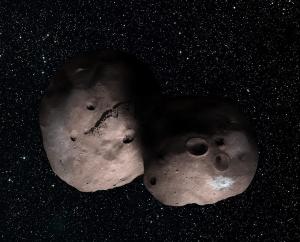 An artist's concept depicts one possible configuration for 2014 MU69, the next target for the New Horizons spacecraft. The craft, which staged a successful encounter with Pluto in 2015, will fly within a couple of thousand miles of the object on New Year's Eve night. MU69 is a chunk of ice and rock in the Kuiper Belt, a billion miles beyond Pluto. It should be relatively unchanged since its formation, so it should reveal new insights into the birth of the solar system. The object could consist of two lobes, as depicted here, or it could be two separate objects traveling through space together. [NASA/JHUAPL/Alan Parker]

When the New Horizons spacecraft left Earth, George W. Bush was president, the first smartphone hadn’t even been announced, and Pluto was still a major planet — but one about which little was known. Two presidents, beau coup smartphone models, and one reclassification later, New Horizons is getting ready for its final port of call. On New Year’s Eve night, it’ll pass close to a chunk of ice and rock more than four billion miles from Earth — the most remote encounter with any object.

New Horizons was launched in early 2006 to explore Pluto. It flew by Jupiter to get a gravitational “kick,” then passed within 7800 miles of Pluto in July of 2015.

New Horizons revealed that Pluto is a remarkable world. It has mountains of ice, plains coated with frozen nitrogen, and a “cauldron” where blobs of warm ice may bubble to the surface. Its thin atmosphere doesn’t freeze out, as scientists had expected. And the north pole of its largest moon is coated with organic compounds that may have come from Pluto itself.

Now, New Horizons has set its sights on one last object in the Kuiper Belt — a vast “doughnut” of icy and rocky bodies that includes Pluto.

On Monday night, it’ll fly a couple of thousand miles from 2014 MU69. It’s about 20 miles in diameter, and it may consist of two bodies, not one.

New Horizons won’t have enough fuel to target another object. So this is its final encounter — a last act for a pioneering explorer.