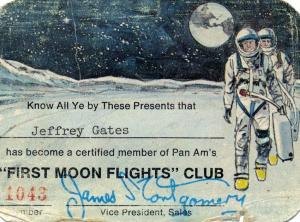 After the spectacular success of the Apollo 8 mission to the Moon, Pan American airlines received hundreds of reservations for its announced flights to the Moon (dates to be determined). Those with reservations received membership in Pan Am's "First Moon Flights" Club, which came with a commemorative card. This one is now part of the collection of the National Air and Space Museum. Alas, Pan Am folded long before it could honor any of the reservations. [NASM/Jeff Gates]

A Japanese billionaire recently bought the first ticket to fly to the Moon aboard a new rocket being designed by SpaceX, a company headed by Elon Musk. But he’s not the first to make a reservation for a Moon flight. 50 years ago this week, in fact, people began booking flights in a hurry.

On Christmas Eve night in 1968, the crew of Apollo 8 staged a live TV broadcast from lunar orbit. It was viewed by what was then the largest audience in history.

By the next day, Pan American Airways began getting calls from people who wanted to reserve their own Moon flights. The company had started a “First Moon Flights” Club after an Austrian journalist booked a flight through a travel agency in 1964. Four years later, the movie “2001” featured a Pan Am shuttle ferrying passengers to space.

By the time of Apollo 8, the company had about a hundred reservations. After Apollo 8, the number climbed to a couple of thousand. And it really took off after Apollo 11 landed on the Moon the following year. When Pan Am stopped taking reservations, in 1971, it had 93,000 customers on its list. Alas, none of them ever made the trip. Pan Am folded in 1991, bringing dreams of lunar excursions to an end.

And while all we can do right now is dream about trips to the Moon, at least we can enjoy the Moon’s beauty from afar. Our satellite world climbs into good view late this evening. Regulus, the heart of Leo, follows it across the sky.